The combination of post-hike euphoria of summiting and the passing of time can conspire to erase any memory of pain or at the very least downplay the discomfort. This may be why I remember the hike up Gunung Ledang via the Lagenda trail as a fun vertical obstacle course. And maybe it was. But I can categorically say that the hike up Ledang via Asahan is not. Sure there’s rock climbing and ladder runs, but coming after an already long and arduous hike, this is the route for hikers who are keen to push themselves.

After playing hopscotch with the Melaka-Johor border while driving from Tanggak where I spent the night, to the meet up point near Laman Tiga Budaya (where the states of Melaka, Johor and Negeri Sembilan meet), I parked up with the rest of the KL Hiking crew at Pos Pendaftaran Taman Negara Lubuk Kedongdong.

Following registration and the submission of our inventory forms, we were given a briefing on what to expect, how long it would take between posts, the terrain and cut off and turnaround times. There were 50 plus KL Hikers raring to go, and after assembling in groups of 10 so that a guide could be allocated to each, we set off.

Though Asahan, after which the trail is named, is the nearest town in Melaka to the trail, Pos Kawalan Asahan and the trail lies entirely within Johor, with the trailhead beginning just behind the briefing area on the other side of a drain.

The trail towards CP1 Enggang Berangan should have been an easy hike, but the gentle slope was turning out to be hard thanks in part to my backpack. Unfortunately in the eternal struggle between being over prepared and heavy and under prepared and light I opted for the former and was beginning to regret it.

Somewhere between CP1’s Enggang Berangan and
CP2’s Hentian Hanuman I started to question whether I had it in me. I still hadn’t hit my stride and the trail packed in some fairly fierce sectionsgoing from a 20 degree incline to a 50 degree one in places.

The terrain was more forgiving between CP2 Hentian Hanuman and CP4 Lembah Beruang, with intermittent flats and even a downhill section after CP3 Hentian Unggas that culminated just as CP4 Lembah Beruang came into view.

I could better appreciate just how lush and lively the jungle was here. Though the gibbons had yet to rise, just after we entered the trail I heard what I thought was a barking deer, nibbled fruits of various kinds littered the forest floor, and furrows of soil on either side of the trail indicated the presence of wild boar. Their hoof prints confirmed this. And was that a tapir print amongst them? I think so….

Frog spawn in a dried up puddle.

Not sure what this fruit is. It looks like a miniature durian but doesn’t smell like one.

Spotted many of these perfect sphere nests along the trail. 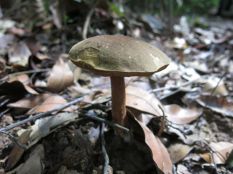 Could this be a tapir print or just multiple boar prints?

At CP4 Lembah Beruang we sat and gathered strength. According to our guide, the warm up was officially over and the hard graft was to begin. He could have fooled me. As far as I was concerned the work began back at CP1!

Set out as a series of stairs formed from tree roots further along this disintegrates into a trail of orange coloured clay, moulded smooth by human use and the elements. It was slippery, particularly on the way down, but thankfully rope is installed.

The aptly named CP5 Batu Berlumut or Mossy Rocks continues the trudge upwards along a combination of moss covered boulders and roots. It’s the perfect prelude to what lies ahead. After 15 minutes, we arrived at the foot of the first of two sheer rock faces.

Padang Batu looked formidable. Long and wide, a single rope lay slack against the middle of this barren grey prominence.

I grabbed on, hauled myself up and began walking using the rope, at first to provide stability, and then when I was confident enough to let  go, as a directional guide. At 60 to 70 degrees, it wasn’t as precipitous as it looked. Nevertheless, my plan to scrabble all the way to the top proved overly ambitious.

We had been hiking almost 3 hours, covered a distance of 4 kilometres and chalked up an altitude gain of 900 metres – my legs were spent. Encouraged by other KL Hikers who had found a place to sit and take in the view, I crumpled into a sad pile and did the same. Even obscured by cloud, it was quite breathtaking.

The  trail’s sole water point is also here and the area it is in doubles as a small camp site for those splitting their journey across 2 days. Ordinarily I wouldn’t be interested in camping, but the possibility of sitting here gazing up at a sky glittering with a thousand stars or a full moon would have made me reconsider. Besides the nearby spring provides a place to wash up and allegedly there’s even a toilet, although its proximity to the water point was kinda grim.

The pressure to throw myself at the mountain was off now as the cutoff point was noon and I, alongside Burrd and Mazlin (we shared roughly the same pace and had been playing leap frog with each other since CP3) arrived at CP6 at 10.30am with 1 1/2 hours to spare.

It was just as well. Like a challenge devised by some demonic physical trainer, the heinous stairmaster type terrain continued for another 20 minutes.

At CP7 atop Gunung Runduk (1078 metres) we could glimpse the familiar cluster of broadcasting towers that sat close to Gunung Ledang’s summit, still an hour away. For others, the summit was already done and dusted. 3 KL Hikers had already bounced passed us making their way back down as we continued to struggle up. They had summited at 10am, taking a ridiculous 2 hours to complete a journey that would take me 4. Ugh.

On the other side of  Gunung Runduk lay the second major descent of the trek – a 10 minute breather before we were climbing back up in the direction of Ledang’s summit. Half an hour later, we were faced with another rock wall, this one narrower and nearly vertical with an incline of 70 to 80 degrees. We wouldn’t be walking up as much as pulling ourselves up.

Taking a quick time out, I pulled my gloves back on, considered the challenge ahead, then grabbed the rope on the right. I can do this! Rhythmically heaving myself up one hand at a time, I could feel my pole and hoop lessons paying off – I actually had arm strength! I would have comfortably continued to the top even but midway, Peri, who was on his way down, suggested that I switch to the left where a dizzying series of ladders wedged between a groove in the rocks would save me some energy.

At a wooden ledge, we caught our breath and let other hikers who were going up or down pass us, before continuing up more of the same sorts of obstacles. As before there was a left and a right option. I stuck to the left having being told it was easier, though I had no way of verifying this.

The temperature was noticeably cooler as we passed the 1000 metre mark. Moss clung to the embankments and up trees, and around us the air filled with bird sound. We eventually emerged at a junction just below the peak. Directly ahead was the Lagenda trail down towards Sagil, to the left, our destination.

Encouraged by our guide who assured us it would only take us 3 minutes we forged on up making the final push over and around the boulderous landscape until above us was sky.

4 hours after setting out, we had finally arrived. Too tired and hungry for celebratory photos, I just wanted to eat.

Though we had until 1.30pm to turn around, at 12.20pm I was ready to go. At rock face 2, I made the mistake of sliding my fingerless gloved hands along the rope as I descended and suffered rope but made sure not to repeat the error at Padang Batu. Otherwise the journey from the summit to CP5 progressed quickly and painlessly, and wasn’t as treacherous as I had anticipated.

With major obstacles out of the way,  the remainder of the journey was almost entirely downhill, with the exception of one uphill section between CP4 and CP3. As each of us descended at different times and at different paces we we were spread out and I was alone for most of the trek. It was a joy to be immersed in the surroundings; I got to see a snake and it distracted me from the pain I was beginning to feel in my toes. Still, I couldn’t wait to tear of my shoes.

Just as Burrd had predicted, 3 hours after leaving the peak, I exited the forest. I might not have started strong or finished strong but Ledang had been conquered, again. Booya!

Distance and time 4.16 kilometres one way. I took 4 hours up and 3 hours down. The return trail is the same as the trail going up.

Rating Hard. The altitude gain is considerable with lots of fierce sections to surmount and rope work and ladder challenges towards the end.

Facilities Parking RM3/car, RM1 per person. There’s a toilet at Pos Kawalan Asahan just before entering the trailhead and rudimentary showers near the parking lot.

Tip The second rock face is particularly vertiginous, so bring gloves for better grip and to avoid rope burn.

Cost Though the Asahan trail is less popular than the Lagenda trail, you must still book ahead for available dates, permits and a mandatory guide. 1 guide is allocated per 10 persons maximum. RM100 is paid as a deposit for any items discarded along the trail accidental or deliberate.

Getting there Take Exit 235 off the NSE and turn right towards  Tangkak. From here you’ll want to head towards Laman Tiga Budaya. Pos Kawalan dan Pendaftaran Asahan will be on your right about 450 metres after passing under the Laman Tiga Budaya arch.
GPS coordinates 2.408364, 102.592284

New fee structure
As of 1 March 2019, visitors to Cameron Highland‘s Mossy Forest and Gunung Irau will need to pay for access to the boardwalk. 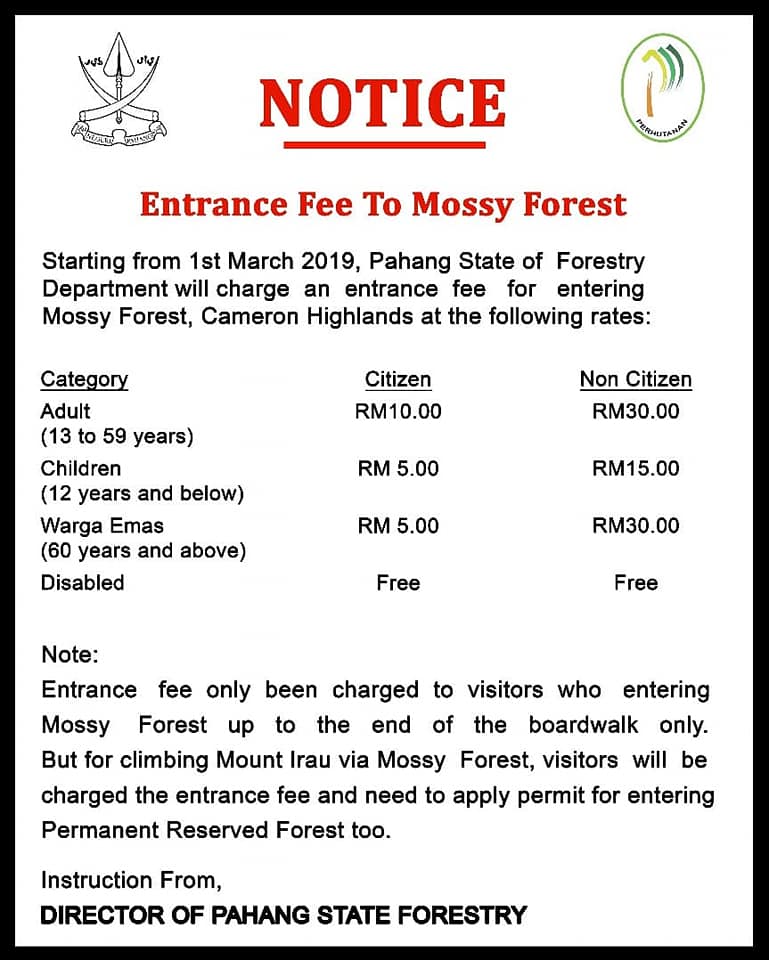