Located on the other side of Padang Pahlawan just behind Melakaraya, Rosa Malacca’s modern boutique hotel is everything Bandar Hilir’s UNESCO Heritage city isn’t. And that’s what you’re gonna love about it.

Designed by local architect Tony Khoo, with ID by the same firm behind M Hotel and British India, it’s this combination of stylish good looks, friendly service and affordable price point has already seen Rosa Malacca go from 30% occupancy at launch, to an average of 50% on weekdays, and 70% to 100% on Fridays and Saturdays in just 10 months – impressive growth for a city with a whopping 220 hotels registered with Tourism Melaka.

The brains behind it are married couple, Ana and Kumar. Both grew up in Tapah, with Kumar hailing from a family of Cameron Highland hoteliers (Hotel Rainbow, Hotel Rosa Pasadena, Casa dela Rosa and Hotel de la Ferns). Following stints in UK, and at  Les Roches School of Hotel Management in Switzerland for Kumar, the pair returned to Malaysia, and after much consideration chose Melaka as the location of their first venture.

Function doesn’t necessarily follow form in the brave new age of Instagram, but Rosa is the complete package – pretty and practical. The inviting waiting area on the ground floor may seems counterintuitive at first, but check-in takes place on the 1st floor. As Ana explains, hotel management wanted to avoid having a reception desk that faces out onto the carpark “like a budget hotel”. It’s a device that works wonderfully creating a sense of expectation and privacy. Soft furnishings and cushions emblazoned with portraits of historic figures also work to soften the chic industrial interior, while mood lighting and a low ceiling create a space that’s instantly intimate.

The same approach is extended to the rooms, which are built around a courtyard with large conservatory windows to let the light in and trees to convey a sense of the outside.

Spread across 5 floors, the 4 room types are the  Deluxe Twin, which is perfect for friends; the Deluxe King and Premier King for couples; the Family Suite for er, families; and the Premier Family Suite, which is basically connecting King and Twin rooms for families or friends that need more beds and bathrooms.

I was comped a Premier King room. Spacious with windows overlooking the village of Kampung Attap, its 4-poster bed is its focal point, and though the mattress is harder than most, I had a great night’s sleep. It came with the usual  mod cons of course, including a flatscreen tv, fridge, kettle and  electronic safe.

The bathroom is similarly large and well stocked with a hairdryer, as well as complimentary toiletries including toothbrushes and a disposable shaver should you have forgotten yours. I’m also pleased to report that the shower, in normal and rain shower options, had good water pressure. 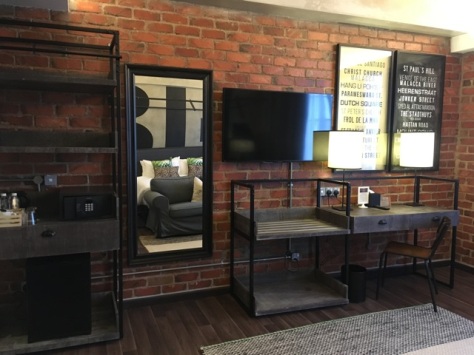 Although served at 7.30am, breakfast was ready at 7am, which was handy as I had to get up and out early for a day of sightseeing and hiking. Should you opt for it, it’s served, buffet-style, in the Courtyard and includes tea, coffee, freshly squeezed juices, a generous selection of cereals and a rotation of hot dishes. On the morning I was there, this included nasi lemak bungkus, a choice of boiled and scrambled eggs, baked beans, hash browns, waffles and pancakes (omg), and breads and pastries. Too bad I had to pass up most of it, nevertheless the scrambled eggs were perfection.

For lunch, dinner and all those peckish moments in between, Bica & Co, the restaurant on the other side of the reception area, has a small but globally minded menu of healthy dishes that are designed to complement Melaka’s sinful offerings rather than compete with them. It’s why you’ll find locals eating here too but if you must, there are concessions to local favourites like the Seared Salmon Laksa, the Chicken Wing Laksa and Asian Glazed Chicken Chop.

I was pleased to note some vegetarian options and tried the Chili Peanut Tofu Slider, which was generous for the price (RM14) and absolutely scrumptious. Unfortunately my picture of it did not do it justice.

The presence of a conference/meeting room have made the hotel popular with businesses on weekdays, while weekends attract visitors local and foreign, most of whom are Singaporean, but Malaysians are quickly catching on.

The team at Rosa are already hard at work to meet expectations. Other on-site facilities include a surau and small gym located on the rooftop on the 7th floor (at time of visit still works in progress), with plans to develop the rest of the rooftop, which has a view across the Straits to Pulau Besar. A second wing to house more rooms, a spa and a swimming pool is expected to be completed by end 2018 beginning 2019.

That may sound ambitious for a hotel not yet a year old, but if there’s anything that matches the hotel’s out of the box approach and positivity, it’s the staff, who were friendly, helpful and dressed in denim uniforms that would make hipsters envious. Big ups to the them but especially Ana and Kumar for their kind hospitality and friendship.

Overall A stylish modern lifestyle hotel you’ll want to stay at thanks to a progressive approach to its offerings and service that is warm and friendly.

Will appeal to Young stylish weekenders and weekday corporates. 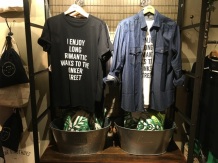 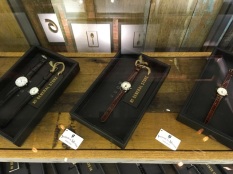 Tip Get your souvinirs at RS General Store. Tucked behind Bica & Co, aside from some slinky dresses for a night out, it also sell Rosa branded clothing as worn by the staff, scarves, slogan tees, and at the reception area key rings and watches among other things. I just wish they sold the cushion covers and framed travel posters that hung in my room as they make great momentos of any trip to the UNESCO Heritage site.

You should know that the hotel has a strict no-smoking policy.

Location Although only approximately 1 kilometre from tourist sites like A Famosa, Stadthuys, and Jonker Street, Melaka traffic is notorious, so park your car and walk into Bandar Hilir. Or better yet jump in an Uber. Rosa Malacca has partnered with the ride sharing service to offer 2 or 3 free rides (for existing and new users respectively) with the use of specific promo codes.

Rates From RM200/night for the Deluxe Twin or Deluxe King room; RM280/night for the Premier King; RM360/night for the Family Suite (does not include breakfast). Book direct at rosa.com.my and apply promo code ”ROSAMALACCA” for special room rates.

A continuation of my previous post: freshly washed floor and perfectly tended grounds of Makam Sultan Abdul Samad at Bukit Jugra.
This is Encik Atan (I hope I spelled it right). Refers to himself as Abang Atan. He is the groundskeeper at the Royal Mausoleum in Bukit Jugra and takes great pride in his work - it’s more than just a duty or a service, he tells me. The original intention was to hike Bukit Jugra but it rained all morning and in the end @ericianchan and I decided to see the historical sights. So in the rain under an umbrella we wandered between the tombstones and admired the location and immaculately cared for grounds.
Play Misty for me….
Stepped through the looking glass….